OUR PEOPLE AND ‘THE CRAB MENTALITY’ 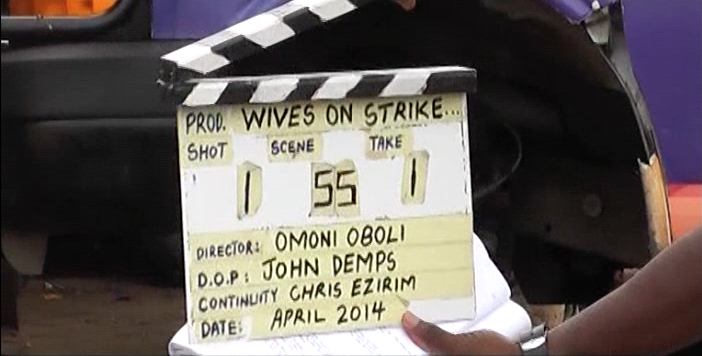 For those who do not know what the Crab Mentality is, let me first describe it using the Wikipedia: Crab mentality, sometimes referred to as the ‘crab in the bucket’, is a way of thinking best described by the phrase, “if I can’t have it, neither can you.” The metaphor refers to a bucket or pot of crabs. Individually, the crabs could easily escape from the pot, instead they grab at each other in a useless “king of the hill” competition which prevents any from escaping and ensure their collective demise. The analogy in human behavior is claimed to be that members of a group (in this case, Nigeria) will attempt to negate or diminish the importance of any member who achieves success beyond the others, out of envy, spite, conspiracy, or competitive feelings, to halt their progress. It is akin to the ‘Prisoner’s dilemma,’ whereby two completely ‘rational’ individuals might not cooperate, even if it appears that it is in their best interest to do so.

It has been making the rounds by some that my soon-to-be-released movie, ‘WIVES ON STRIKE,’ which is about a group of women who decide to deprive their men of sex for the sake of a cause, was copied (or stolen) from the movie, ‘Chiraq’, which was produced and directed by the internationally acclaimed ace filmmaker, Spike Lee. Firstly, let me table some facts here: the movie concept came to me about 4 years ago when we wanted to do a movie about women going on strike, but we just couldn’t find a reason for the strike that would make sense to our audience. We felt there was no sense in making comedy, just for comedy sake. At least, that’s how I think, and I like to stick to what I know and leave others who are better at their own areas of expertise to do theirs. So when my husband and I wanted to do something concerning the Child-Not-Bride issue which was steaming up back in 2013, we decided that we had found a good enough reason for the strike. I wrote the script, and when we were ready we started principal photography in April 2014. Unbeknownst to us, the women in South Sudan were suggesting a sex strike to end the war in their country later that year after our shoot, and this I heard last year from a United Nations worker whom I met while speaking on the issue of the child bride and our movie’s theme. When I shot the movie, or back when I was writing the script, the idea of going on strike was just fantasy and wishful thinking, not knowing that it had really been conceived by other women in practice, or by other filmmakers and playwrights in theory. 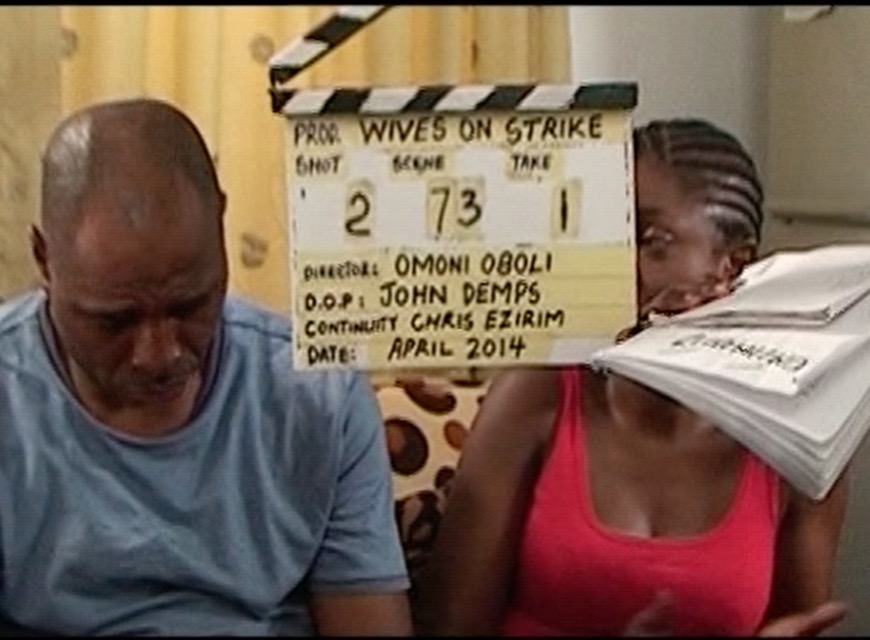 The first time I heard of ‘Chiraq’ was when my husband sent me the trailer last year, prior to its release. We both foresaw the headlines, “Omoni Oboli copies (or steals) from Spike Lee’s Chiraq for her movie,” or, “Nollywood is at it again! Copy! Copy! Copy! Omoni Oboli has joined the bandwagon of Nollywood producers who steal original works and make it their own”. Spike Lee’s ‘Chiraq’ is quite similar to the South Sudan women’s reasons, because it is about ending violence in the Chicago violent black community. It is in no way similar to mine! But that could be ‘clever me’ trying to steer so far from being the same that I’ve tactfully (or tactlessly, considering that I’m Nigerian) changed the plot, as some might assert. Let’s look at it scientifically, or systematically: There’s nothing new under the sun, therefore, stories and ideas are not exclusively given to one person only. The fact that one person presented it first does not always mean the other person copied. I shot my movie in 2014 as clearly shown on the clapper boards of my movie rushes. Spike Lee commenced principal photography (that means he started shooting) in June 2015, and released in select theatres on December 4 of the same year. Heaven forbid that Spike Lee would copy little old Omoni Oboli, “who is in our Nigeria here!” How can that happen?! If I had released it first on October 1st, instead of ‘The First Lady’ like I did, then Spike Lee was definitely being artistic and the similarities were just mere coincidences, but since I decided to release later, then I ‘definitely’ (beyond a shadow of a doubt) copied Mr Lee. Case closed!

I have never met Spike Lee. The only other way I could have had the same movie theme, would be to trace correspondence between us, and I don’t have any such correspondence. We’ve never exchanged emails or met in any capacity. If I wanted to copy a movie theme, it would be safer to go for one who isn’t as popular as Spike Lee, unless you’re dumb! Not that I’ve not been called that by people in the privacy of their own homes, simply because many perceive us who are in the movie industry as dumb. That is such a strong theme, that if I had known beforehand, or knew that Spike Lee was doing the movie at the same time (which he wasn’t) I wouldnt have shot the movie or I would have mentioned that it was adapted from his movie. It’s a lot easier to copy from an obscure industry which is less know than yours and get away with it than the reverse. Which is safe to say that if Spike Lee was copying from me, no one would blink since Hollywood is a bigger industry. They would simply say, “Spike copied from who? Never heard of her,” and move on. But I know that he didn’t copy from me either, cos our stories are radically different, save for the sex deprivation theme. Also, he coined his from a classical Greek comedy, ‘Lysistrata’, by Aristophanes, whom I’d never heard of until just now while trying to write this article (doing some research) and most people haven’t either.

Why did I start with the metaphors? It is simply to call out so many among us who would rather believe the worst of their own rather than admit their faulty standards: who, instead of doing their due diligence to ascertain correctly the truth about anything, would prefer to attack and believe the worst of their own. They make statements like, “let’s be real,” and trail it with big words and their statuses, showing that they live in affluence or live abroad or locally, and possess the level of intellect to know better than we mere mortals who have not walked in their shoes, as the only validation for their claims. Haba! When are we ever going to give ourselves a chance or a break from the hateful, condescending, self-loathing, low self esteem, pull down syndrome that basically surmises our position as truly living with the ‘Crab mentality’? When would we, like other nations, first take time to celebrate, and then do our due diligence to find out the truth before we start mouthing off words that we can’t affirm often with the intention of pulling our own down? How can we demand love from others when we don’t even know how to love ourselves first. We rarely use those same standards when assessing others from other nations. We live by the code, “It’s the Nigerians that are wrong first, until proven otherwise.” We hope to make ourselves look big by making others feel small. We have, as my husband would put it, the “King and I” syndrome, which he basically defines from the king’s character in the movie of the same title as standing tall because you’ve forced everyone else to bow in your presence, and not because you’ve climbed higher. What would be the aim of those who keep bringing this issue up, but to try and make my work less than what it is so that I can lose at the cinemas. I thank God that my work has been successful so far, and by His grace we will record another success with ‘Wives On Strike.’ in Jesus name! Amen!

Please go out there on the 8th of April and show support for your girl by watching my movie, ‘WIVES ON STRIKE,” (a comedy) which is in no way like that of Mr Lee’s ‘Chiraq’ (a satirical musical drama), but by God’s grace would impact lives and entertain everyone who goes out there to watch it. In the spirit of the new movement to buy Nigerian, the first step to achieving this turnaround must start with our deliberate actions towards loving Nigeria first, and watch how our taste for Nigerian goods would develop and help build our economy. See you all at the cinemas on the 8th of April and God bless you all. As always, I love hearing from you so drop me a line. Keep smiling!

Below are screen grabs from various Instagram pages clearing showing shots and videos from as far as a hundred weeks ago. 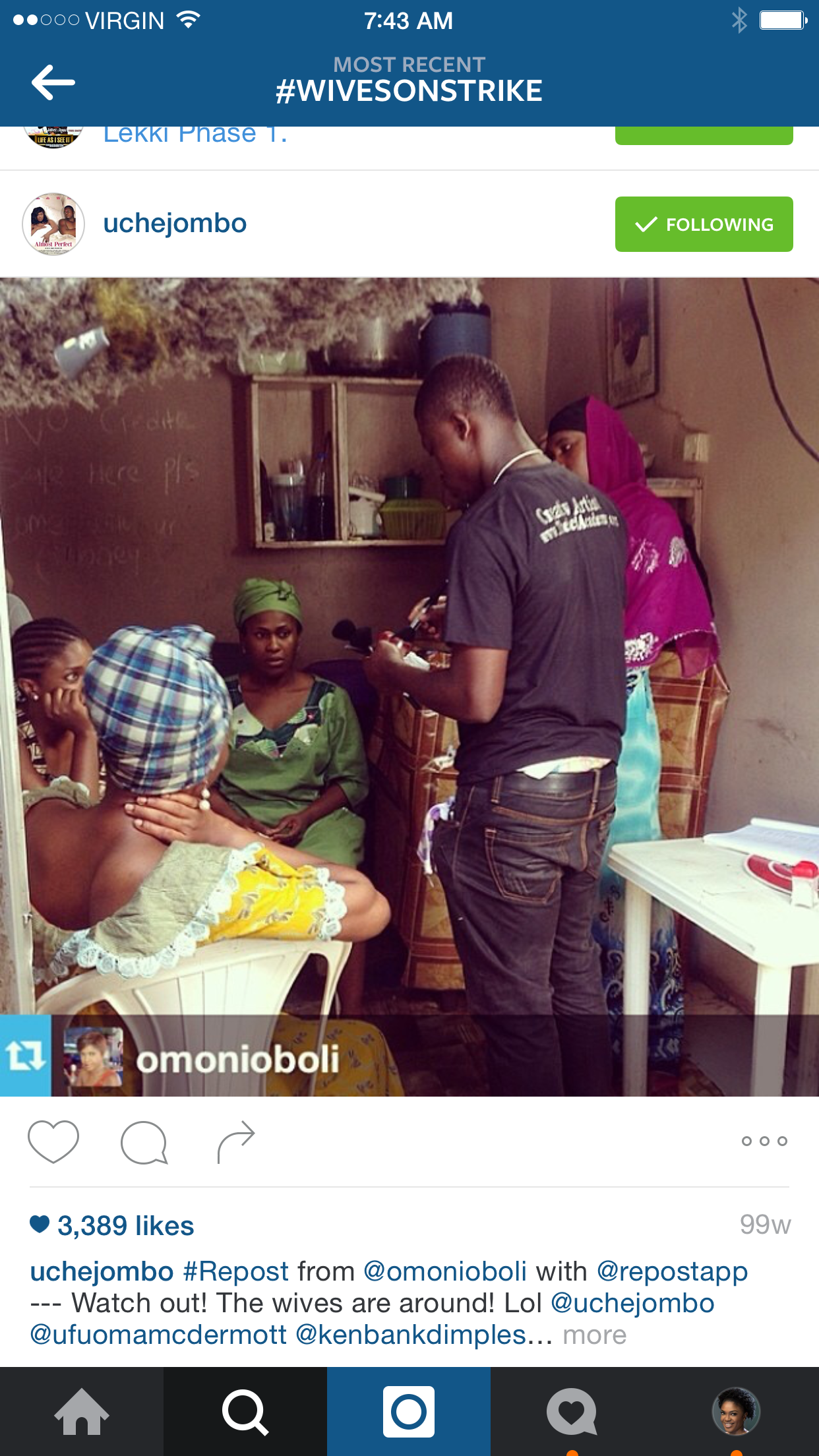 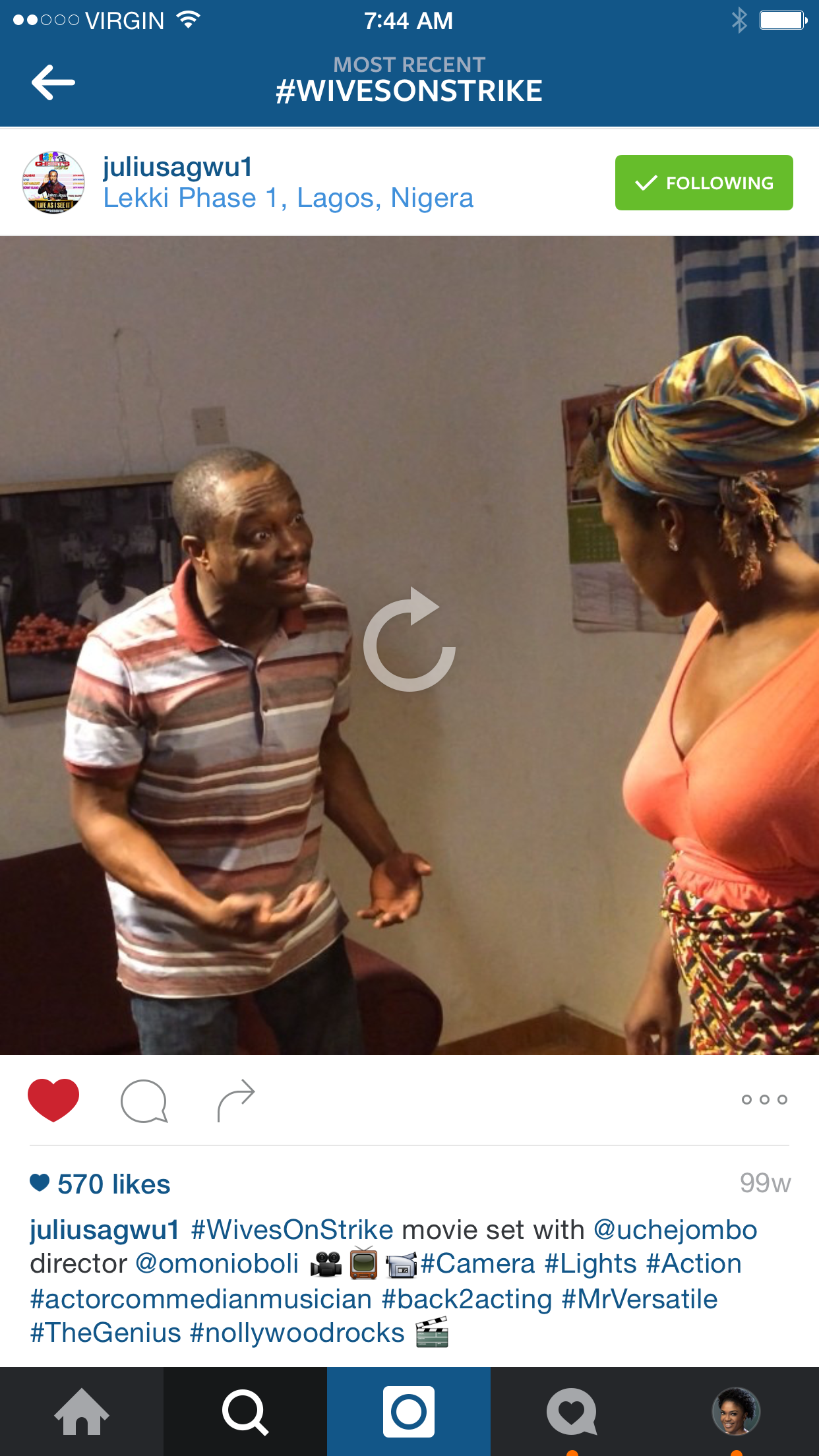 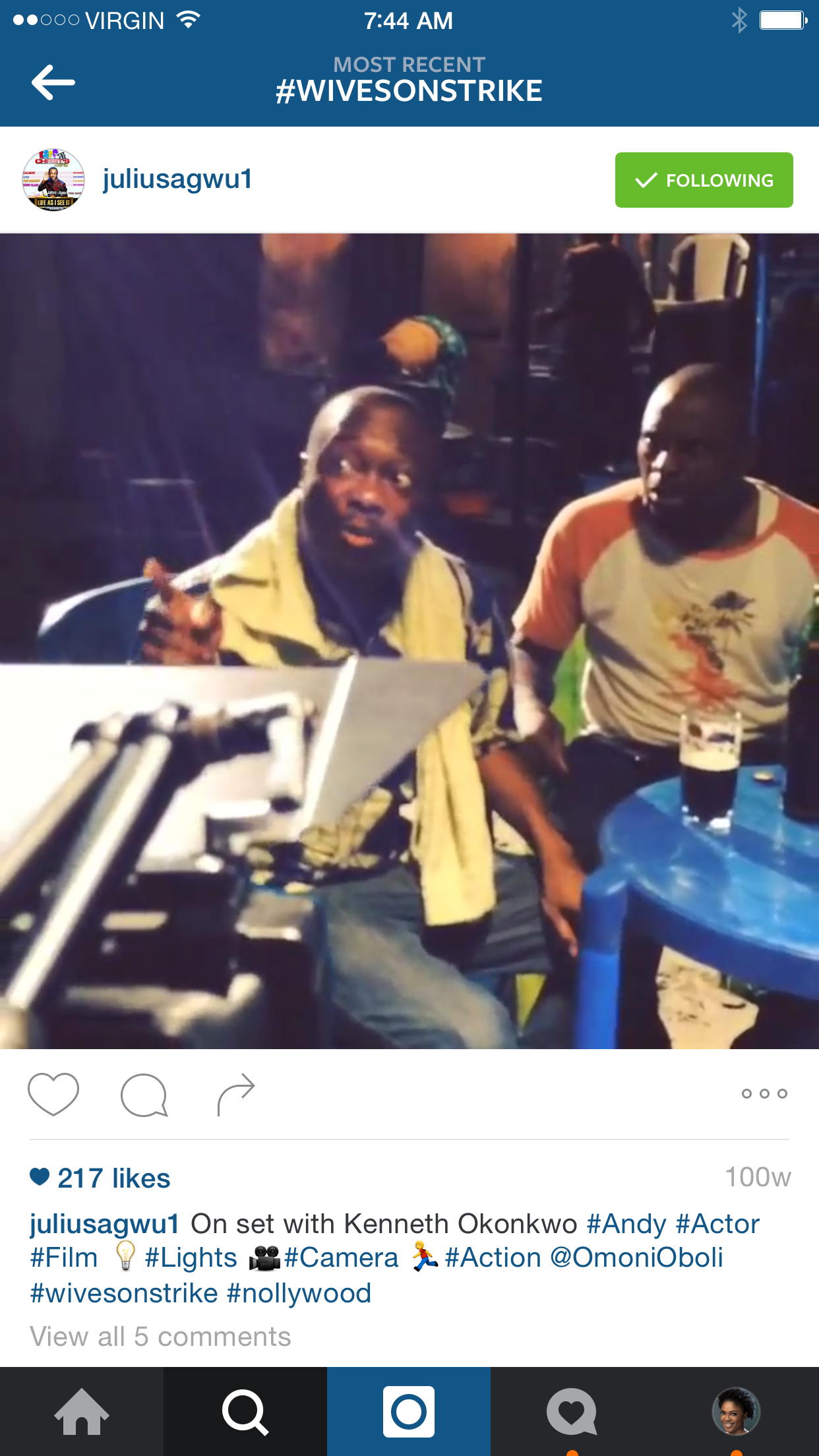 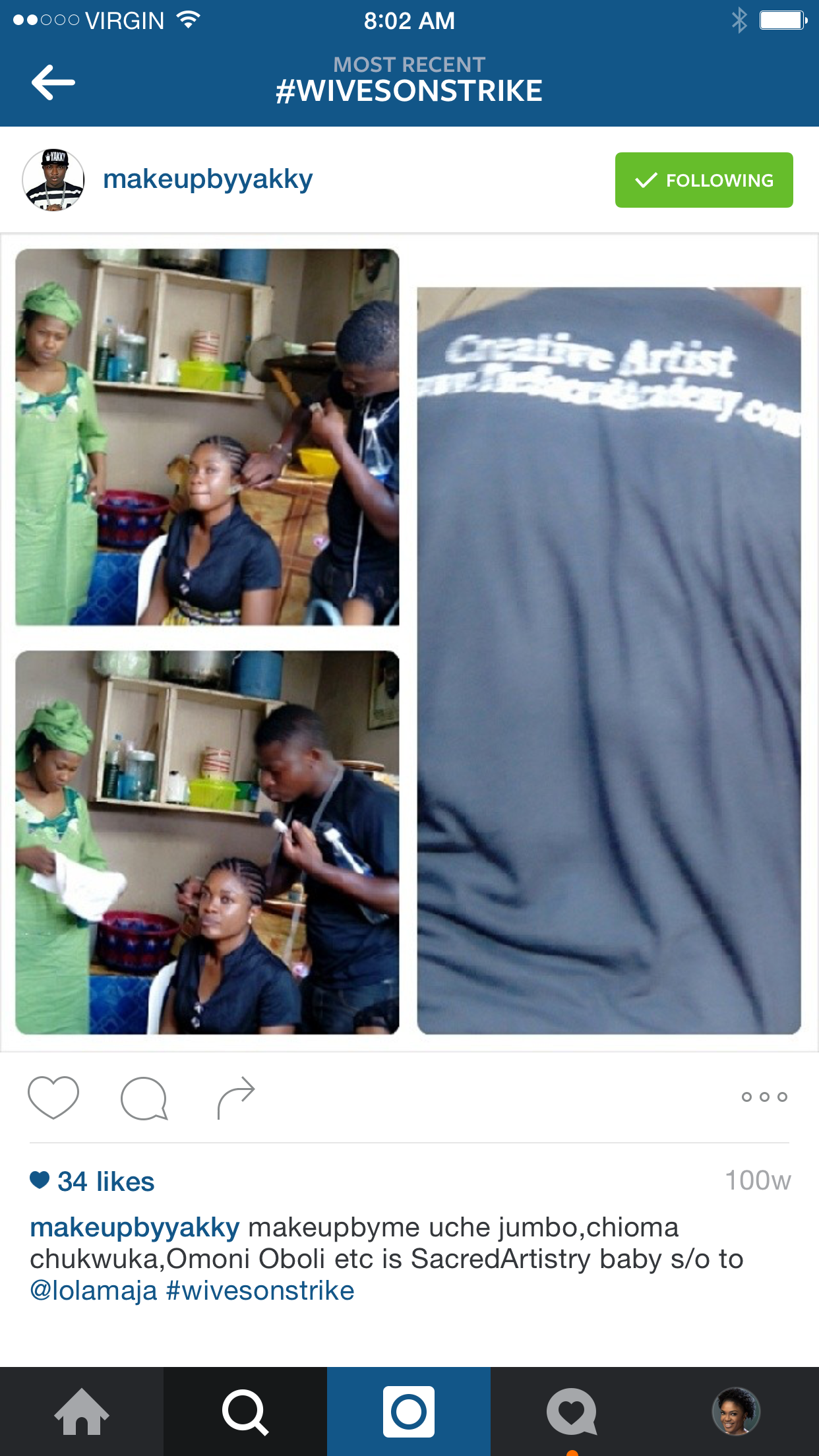