I DARE TO CALL HIM FATHER

I am Omoni Oboli and I represent Naija! My good friend said to me, as I reflected on the outcome of elections, “Don’t worry Omoni, it will be fine.” I looked at him incredulously and said, “How can you be so calm? We were in this together!” He replied, ‘I know how to compartmentalise things. We did our best. We fought a good fight and we should be proud! We are all winners!” 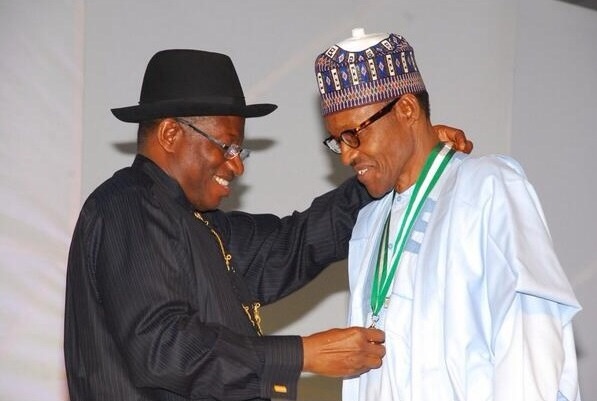 Indeed, we are all winners, because Nigeria won! The predictions for this year’s elections were nothing short of doom and gloom for our dear nation. The massive migration of many Nigerians abroad for ‘holiday’ was a safeguard approach to avoid the sureness of the tinkering idea that people were meant to be slaughtered after the elections. “The land would be bloody,” they presumed, but one man, on whom the onus fell, decided to taper off his personal ambition for the good of his people! That, my friends is a true leader! That is the man I call a Father!

I campaigned and supported Goodluck Ebele Jonathan amidst warnings from friends and foes. He was the unpopular candidate. How then could I lend my face and stake my reputation to support him? Was it because of the pecuniary compensation? The truth, let’s be honest, is that those of us in the entertainment industry who supported Goodluck did it for the love of a man who believed in us and understood the potential we had that could help create the massive jobs we so needed as a nation and the impact it would have on our nation’s GDP. He gave us his attention and he won our hearts and earned our trust, and we gave it right back when it mattered the most, by supporting him.

Goodluck Ebele Jonathan did not let me down! He has been described as many things, but in his lowest moment he stepped up in grand style to make it our proudest moment. I have always loved and respected him, but the respect I have for him hit the roof when he made that call! The call that saved the lives of thousands of innocent Nigerians. He said, “My ambition is not worth the blood of any Nigerian,” and I believe these words should be carved in stone and erected as monuments in the six geopolitical zones of this great country to remind everyone in any position that politics is not a do or die affair! He kept his words which were, “I do not play do or die politics,” “The purpose of power is to better the lives of people and not to take it.”

I have always maintained that Nigeria belongs to us all. As a well brought up child, I respect my elders, and so my campaign for the Presdient was never brought to the level of mudslinging, name calling or insults just to score cheap points. This would be totally out of character for me and I was disappointed that many of us resorted to such on both sides of the parties. I simply brought out my strong reasons. Reasons that I carefully researched before educating fellow Nigerians about them. We gave it our all and we the people made our choice, and won! In the end, Goodluck lost the battle but gained victory as a true statesman and is now seen as the perfect gentleman. The sacrificial lamb that took all the anger and the hurt Nigerians have felt over the last couple of decades. Nigerians are placated and we should continue to promote the peace that the President has given us.

A true Father, your legacy will outlive you! You have shown yourself to be a true lover of your people! The world celebrates you today. I salute your courage and the fact that you kept your words “I would ensure free and fair elections and respect the will of the people.” You surely deserve the Nobel peace prize and the Mo Ibrahim award! Perfect gentleman! True democrat! True statesman! Man of the people! Man of the hour!

I say congratulations once again to all Nigerians and the President elect, General Mohammadu Buhari, who has stepped into prominence again at the helm of affairs of our great nation, tenaciously fighting all the odds and rejections because he looked to the prize. May your rule be peaceful and may Nigeria grow in love and prosperity during your tenure in Jesus name! keep smiling!

← WHAT’S SO COMPLETE ABOUT COMPLETE FASHION?
WHAT’S SO SPECIAL ABOUT VACATIONS? →